Continuation of our Anniversary

The actual day of our anniversary happened to be the finals of Qatar Exxon Mobil Open 2008 and fortunately, my husband was able to get tickets for us. It's Andy Murray of Great Britain VS Stanislas Wawrinka of Switzerland for the finals. Big players like Federer and Nadal did not join this year's tournament but it's still a good game to watch.

I've been here for almost four years already but I always skip events like this even if entrance is FREE. I always say there's not much to do in Doha - that's true but not absolute. Qatar open is one of those events that you can look forward to every year. Free tickets and open for all, what else could you ask for? This year, they even had free Doha 2016 shirts, caps and pen as promotional items for Qatar's bid for 2016 Olympics. 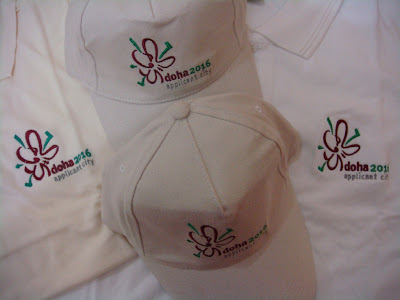 This is an embarrassing revelation but it's my first time to watch a tennis match in my entire life - not even in T.V. or some amateur tournament. I know some famous tennis players by name but never really watch a game. I'm clueless about the game rules, terminologies and scoring system. All I know is that you have to bring the ball to the other side of the court by use of a tennis racket. I wasn't into sports. Didn't play any of them except bowling. LOLs My husband was my live Google during the games. He explained to me the terms, the rules, the scoring system, etc.

After two sets, the score is 1 all. We didn't wait for the decision game anymore because we were chilling and we're hungry. The night before was warm so we didn't expect the temperature to drop and we did not bring thicker jackets. As expected Andy won the match.

Before heading home, we had late dinner at Papa John's - our new favorite. I first heard about Papa John's from Mhavis and then from my boss. Their pizza is superb, not oily and even cheaper than Pizza Hut and Sbarro. We ordered chicken wings, chicken strips, cheese sticks, chicken florentine pasta, large pizza and drinks - all for QR 114 ($1 = 3.65) only. We ordered so much food we finished only half of the pizza.

Everyone enjoyed the night! I hope to go out more often this year and explore things that I've been skipping for the past 3 and half years!

Pictures are in my web album.

Yup. Papa Johns make wonderful pizzas! Glad that you tried and enjoyed it.

So nice to know that you liked Papa John's. We also watched Qatar open but only up until the semis. But that's ok, we really enjoyed ourselves and also got some of the freebies.