We did not intend to visit Krispy Kreme during its opening at Villagio Mall but it so happen we went to Hyatt Plaza (Homes R Us) (adjacent to Villagio) to canvass for a new bed. On our way, my husband and I thought of stopping at Villagio Mall (beside Hyatt Plaza) to pick-up some Krispy Kreme. When we reached Villagio Mall, there's a long line of cars attempting to enter the parking area. The volume of cars and crowd is quite unusual. I'm not sure if it is because of Krispy Kreme's opening or because of increasing population. Frankly, I have no idea! 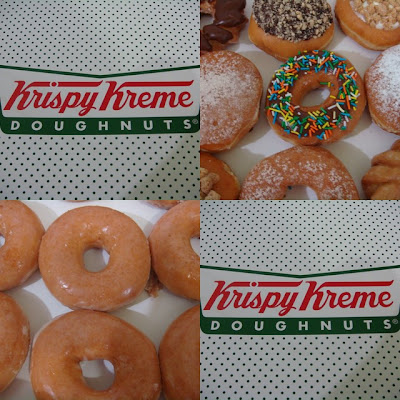 We dropped the idea of buying Krispy Kreme and proceeded to Hyatt Plaza. We didn't find a bed we like and already about to go home but we couldn't get over Krispy Kreme - to think we are not doughnut fans. We can walk to Villagio from Homes R Us but our car is parked on the opposite end of Home R Us while Krispy Kreme is on other end. Finally, we just decided to go to Villagio. As we approach Krispy Kreme, we saw more and more people carrying several boxes of Krispy Kreme. We were amazed at the huge crowd lined-up in front of the store although we waited less than 10 minutes for our turn because there are pre-packaged boxes already. We bought two dozens of donuts - one dozen glazed and one dozen assorted. The doughnut bread is good but some variety are just too sweet for me. To those who prefer the less sweet variety, I suggest Cinnamon Apple-filled, Powdered Strawberry-filled and New York Cheese Cake.

I must say it is the most successful store opening I ever witnessed in Doha. I wonder how many thousand dooughnuts Krispy Kreme sold on its opening day.

I don't know why people go gaga over it because for me, Dunkin Donuts and Mister Donuts are better. But still a donut is a donut :) And I definitely have a very sweet tooth! Do you like donuts?

Thanks, Nina, for visiting A Pinay In England. When you get the chance do visit my other sites. :)

joy
Your Love Coach
The Goddess In You
Norwich Daily Photo

@Dr. Joy
Krispy Kreme doughnut bread is good. I like donuts but not among top favorites. I love chewy moist walnut brownies and chocolate cake and I usually bake them using henny sison's recipe. I also love brownies from Becky's Kitchen (along Vito Cruz.

I've visited your other sites. Late, I'll browse the archives.

@Dr. Joy
Krispy Kreme doughnut bread is good. I like donuts but not among top favorites. I love chewy moist walnut brownies and chocolate cake and I usually bake them using henny sison's recipe. I also love brownies from Becky's Kitchen (along Vito Cruz.

I've visited your other sites. Late, I'll browse the archives.

Was able to try them last week. Not too impressed. Might eat a couple in a year but not looking forward to eating more. Great that we didn't line up to get the year-round coupons... he he he

I think Kispy Kreme is not that extraordinary but the dougnut bread itself is better than dunkin's in my opinion. I prefer cinnamon apple because it's not too sweet. It's quite expensive to buy a piece, isn't it?